The world’s fastest growing language (yes, you best believe it!) has its own official day, and it’s today! Just when you think the world couldn’t become any more Emoji obsessed!

So what’s the big deal? Well, everyone’s using them to communicate. From school kids to parents, even to celebrities likes Andy Murray predicting his wedding day;

But why? Well, research from Bangor University showed that 72 per cent of 18 to 25-year-olds adding that they found it easier to put their feelings across using emoji than with words. Effectively with two emojis you can respond instantly with what would take you a sentence or two to write. We now have an official concentration span of 8 seconds, so it makes sense the way we communicate is becoming much simpler.

Why today though?! You’re reading this article, so we’re going to assume you’re an emoji user or at least have them on your phone. Head over to the calendar section and today might make a little more sense.

Look at Emoji’s from a marketing/advertising sense; big brands have been jumping on the Emoji bandwagon recently. Chevrolet recently created a press release made up of nothing but emoji’s. The most innovative use of emoji’s has to go to french child advocacy group Innocence En Danger who created an ad campaign to shock. McDonalds was quick to find out that emoji marketing messages can be hijacked fairly easily though; 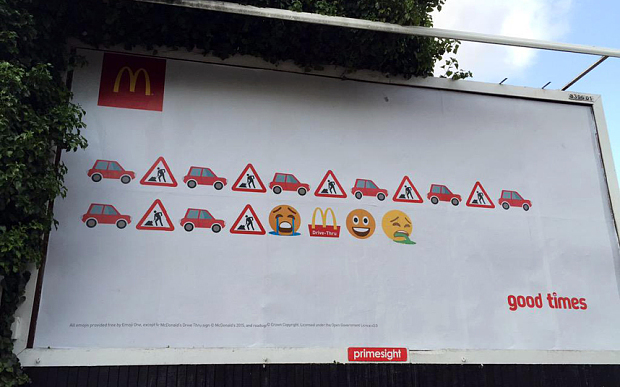 Personally I think brands should definitely look to embrace trends like this, but creating marketing messages from purely emoji’s might be too much, what do you think? After all, the majority of people combine use emoji’s to sum up feeling, not purely communicate.

What’s your favourite emoji? We’ll have to go with this combination, hopefully, you can work it out!

We’ll leave you with a tweet from Google, it’s great to celebrate #WorldEmojiDay but don’t forget about those trusty digits and letters!