There’s one event that comes to mind when you think of fake news and that’s the US election, during the build up we saw a huge surge in fake stories relating to both candidates. When the President was announced, you couldn’t help but question whether this had affected the outcome. We can see in the chart below that number of headlines featuring the term fake news; in the aftermath of the US election, many outlets started to analyse the number of fake news stories in an effort to understand why and where this phenonium originated from.

Many of these fake stories were anti-democrat and portraying Hilary Clinton in a negative light, although there were also a number of stories that attempted to smear Donald Trump. On Facebook alone, there were 30 million shares of fake news stories that favoured Trump, compared to just 8 million that favoured Hilary. These politically-focused stories were being churned out a phenomenal rate with no signs of slowing.

Where did they come from?

The news stories originated from all over the globe, coming from a wide range of different users all with varying motives:

One of the common themes with fake news and US election was the fact that right wing stories were shared much more than left wing stories, hence many outlets started focusing solely on these types of stories as they were much more profitable/successful. Many high profile Republicans such as Michael Flynn, Jr shared false stories that had no evidence. Should users that are more influential, with larger followings, be held more accountable for sharing false content? Just the other day Sean Spicer, Donald Trump’s press secretary, quote retweeted famed satire website The Onion in what seemed to be a genuine and real statement.

Many readers are now receiving a huge amount of information on the go, as a result, many aren’t taking the time to fact-check the article with others failing to look beyond the headline. We take for granted that a journalist has done their research and will be held accountable by their boss and peers if they were to lie, but a blogger publishing content on his own website doesn’t have to adhere to those rules. This is then amplified through social media as it allows us to instantly share with little repercussion if it’s found to be false. The below figure shows the impact that social media has played in spreading fake news. 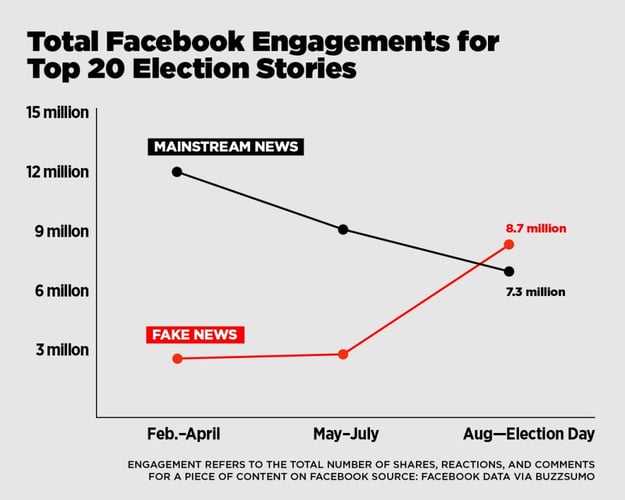 A recent paper published by Standford and NY university claimed that fake news had no impact on the US election. With the vast majority of voters still got their news from mainstream sources. But with the huge focus surrounding fake news (and the subsequent analysis of the topic), it’s hard to argue it didn’t have some form of impact. The fact that countries such as Germany and France are scrambling to combat fake news ahead of their general election (with far-right groups looking to take advantage), it would suggest there is a need to be worried at the impact it could have. Stories such as #PizzaGate overshadowed the election, at a time when voters needed as much information as possible to make a key decision.

Is this problem set to become a bigger issue in the future? Quite possibly, as more ‘news’ sources appear, the problem becomes harder to police. Facebook was accused of not doing enough to stop fake news spreading, in some cases they actually promoted fake news articles through their ‘trending topics’ feature. As people continue to receive their news from social media and other alternative stories, does the quality of journalism decline and the integrity of the news disappear?

This could also be the start of a new-age propaganda trend in which people look to influence events or individuals via the creation of fake news and promotion through social media.

Did you see any fake news during the election? What was your response – were you able to identify them as fake? Or did you click the link to explore more? Or, worse, did you share the stories?