Influencer marketing is a term you should be very familiar with, maybe even sick of, as it became a buzz word in the last 18 months. I’m sure you’ve also heard how ‘big’ it’s going to become/already is. But how the hell do you actually carry out successful influencer marketing? Blogger outreach programmes have been popular for years, but there are now huge opportunities on social media platforms such as YouTube, Instagram & Snapchat. There’s an influencer for every niche!

What is Influencer Marketing then? – If a brand told you to buy their product or an individual told you to buy it, which would you be inclined to believe? Word-of-mouth is one of the oldest but most effective forms of marketing and as new forms of communications emerge, word-of-mouth still applies to them. Social media has created influencers – individuals with huge followings. Brands are now tapping into these markets and using to influencers to spread their message via word-of-mouth marketing. Not only is it perceived as a more genuine message, but it also offers the chance to tap into an untouched market made up of your ideal demographic.

Jerome Jarre is the king of Snapchat. He partnered with Relativity Media, for the film “The Best Of Me.” Six hours, nearly thirty snaps and twenty-six million views later, an example of a successful influencer marketing campaign! Not many marketing activities can get your brand in front of that many of your relevant target market. 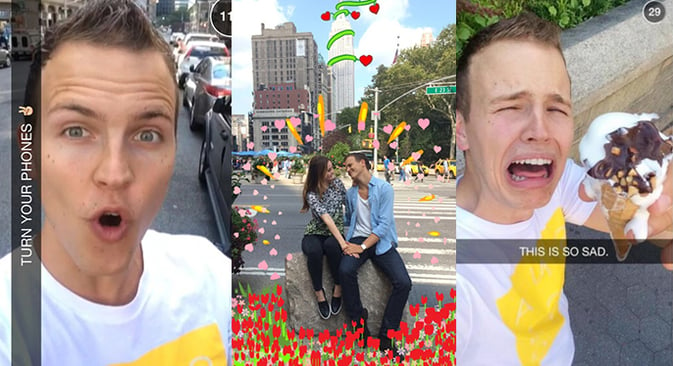 Who’s the right influencer? – Big isn’t always best! The influencer you choose to use will be dependent on your brand and product. If you decide to use a well-known celebrity as your influencer, it’s worth noting that you’ll be paying a premium price for their large following and as a result, there’s a good chance you’ll be targeting irrelevant people. If your brand produces luxury men’s suits, asking a female food blogger with 500k followers would be completely irrelevant, yet an account like @permanentstylelondon with 21k followers would be much more effective. It’s important not to assume an influencer’s audience (a female 24-year-old’s influencers followers aren’t necessarily all female 24-year-olds), the more research carried out at this stage will shape how effective your campaign is. When we look for influencers we believe you should look at;

An example of relevant influencer; AMC chose the Fine Brothers to promote their new TV show ‘Halt and Catch Fire’, the content of the series and YouTube video (vintage computers) mirrored each other, as well as their audiences. It received over 17 million views.

Do your other marketing activities complement your influencer strategies? – Generally, you always want your marketing activities to be pulling in the same direction to maximise efforts and reinforce your message. The same applies to influencer marketing; are you making the most of this opportunity? Simple things like retweeting or regramming their messages, collecting soundbites or incorporating their endorsement into newsletters are all good practice.

The relationship with the influencers – You’ll be putting your trust in a complete stranger, so it’s important you get to know the influencer. Ideally, you’ll both benefit from this relationship so communication and clarity are key. You have to trust the influencer because they know their followers best and they know what works for them (after all, they did build up their own following). Therefore, you can’t force the message and construct it yourself. Give them the product or service and let them create the relevant marketing message.

Ok, how do I measure the success of an influencer marketing campaign? – The benefit of digital media is that it allows us to track nearly everything; from traffic, impressions, clicks, to engagement. This gives us a good idea of whether you’re making an impact through influencers. It’s worth noting that although some content disappears (Snapchat & Periscope), the benefits outweigh the disadvantages. 80% of word-of-mouth marketing is said to happen offline; how many times do you overhear people referring to something they saw posted online last night?

So who else is doing it? – If you have a think about it, you’ll probably be surprised just how many companies are doing it and how often you’re exposed to influencer marketing. Sometimes subtly, sometimes not so much. Next time you’re reading a blog, watching a video or browsing Instagram, just ask yourself if that brand mention was on purpose or by chance? 😏

For example, this innocent instagram post was actually Burts Bees and @Mirrorsme (famous for her doodles with 150k followers), teaming up to promote a makeup range. Burts Bees believed her followers matched up to their target market of 18-24 American females.

Other things to keep in mind;

Still struggling to make sense of Influencer Marketing? – Leave any questions you have and we’ll try to help out as much as we can. We’ve worked with a range of influencers; from a veteran of World’s Strongest Men competition to the cast of an award-winning soap, a wide range of reality stars, and some of the country’s most popular twitter accounts!