Unless you’ve been living under a rock, you’ve got a good idea of what live streaming is. Whether it’s receiving a notification on Facebook telling you your friend from high school is ‘Live’ or scrolling through Twitter and catching Andy Murray romping to victory at Wimbledon.

Live streaming is changing the way in which we consume content. On Facebook alone, their ‘Facebook Live’ feature has gone from awkward selfie videos to slick productions of TV style chat shows in the space of 6 months. While the big platforms are pushing this, many brands, particularly traditional brands, are slow on the uptake and still unsure of the benefits. We only have to look at the recent US presidential debates to see the role live streaming is now playing. TV audience declined throughout the debates, whereas live streaming steadily increased. Although still only a small percentage in comparison, it shows changing habits. 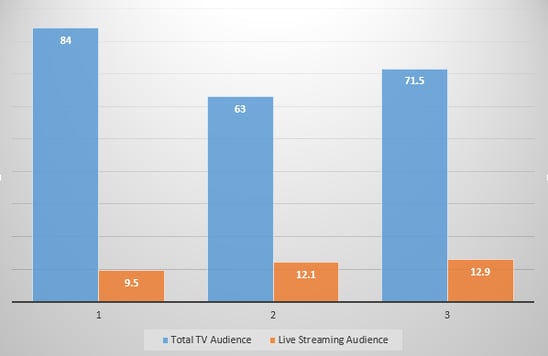 Speed: Facebook was showing the debate with a 7 to 13-second delay, compare this to satellite, that had a 20-second delay.

Awareness: People are becoming more aware of live streaming through others sharing streams and word-of-mouth.

Convenience: Being able to watch a major event wherever you are is a huge advantage. This is particularly relevant for international viewers, where live events might be on at awkward times such as commuting on the train to work.

Engagement: It offers the ability to enjoy real-time conversations with other viewers who share similar interests (much better than shouting at the TV on your own).

In marketing, we’re used to how Facebook operates now. When it wants to push a certain element, it kinda twists your arm and forces you to. If they want you to use paid ads, they drop organic reach. If they want you to sell and buy things on Facebook, they place Facebook Marketplace at the centre of the mobile app. Facebook Live is no different, they’re pushing this feature heavily and it gives you the opportunity to be an early adopter and take advantage of the favoured algorithms.

With TVs still being the central point of most homes, Facebook’s latest move should see Facebook Live play a bigger role at home. Facebook now allows you to watch live streams directly on your streaming service TV, while still being able to engage with other viewers. But don’t expect it to stop there, long-standing rumours of a Facebook dongle could lead to Facebook (and Facebook Live) being fully integrated into your TV and homes.

Why should you care:

Where can you get started? The majority of platforms are already offering live services (or looking to incorporate them).

(Instagram have been testing a live platform in some countries)

What to be posting?

Things to know before starting:

Want to start live streaming, but still unsure of where to get started? Contact 01772 915005 to talk a member of the team and learn more about live streaming.