Twitter has updated its ad platform to allow real-time, conversational advertising, that allows consumers to interacts with, and alter, brand messages. The introduction of Conversational Ads on Twitter is brand new for 2016 and the social media giants claim they’ll offer marketers a higher return on investment when it comes to social advertising.

What are Conversational Ads?

Essentially, these are ads that contain bold call to action buttons encouraging users to get on board with brand messages and campaigns. They can contain custom messages and hashtags and they appear in timelines as would a normal promoted tweet, like so; 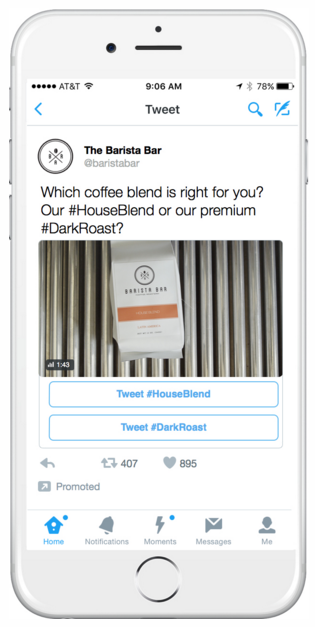 Users interact with the tweet by selecting one of the given options, and this then creates a pre-written message ready to be tweeted out by the user from their personal account. The user has the option to edit this message as they see fit, and once they hit tweet, the message, along with the original media and calls to action, appear in the users own tweet stream. They appear as a normal tweet does, like so; 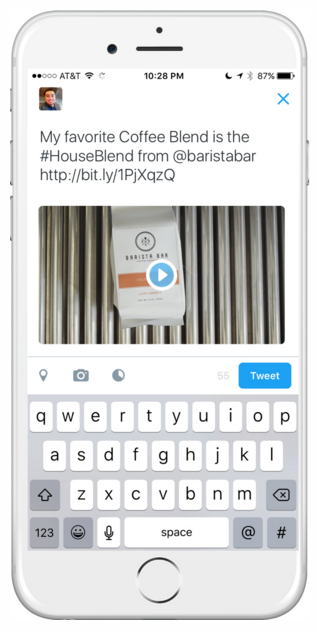 What do Conversational Ads mean for marketers?

In short, they’re good news. By allowing users to communicate with a brand and get involved in how they choose to spread its messages, it’s effectively like gaining heaps of brand ambassadors, except you don’t need any extra budget to do so, it’s all rolled into your social advertising plans. It allows users a bit ownership over how they promote your brand for you, meaning they put their own spin on it whilst still preaching for you.

Personally, I think it’s a great move. It plays into the narcissism at the root of social media – people post things they want others to interact with or see, and all of this creates the image of the user that they want us to see. By allowing everyone the chance to to edit brand messages it means we can all make our favourite brands fit into this image, thus making us more likely to engage, spreading brands messages further than they’d reach organically, for no more than it costs to run a normal ad. This is great for marketers, obviously, but the customisable messages are also really handy for users too.

It also means the tweets the users are sending can be interacted with, by brands or other users, thus creating conversations about your brand online.

When can I try out Conversational Ads?

Now! They were introduced last week and a few brands, such as Samsung Canada and Lifetime TV have been on board with them since they were in Beta testing towards the end of 2015.

Will you make the most of Conversational Ads? Let us know in the comments below or on Twitter itself at @3manfactory!