Social media has influenced and changed brands across the board, but there are strong arguments to suggest one sector has benefited more than most; fashion.

The power of social networks on fashion is undeniable, with image led platforms such as Instagram and Pinterest paving the way for labels to get in front of their audiences 24/7. From high-end designers to high street brands, right up to start up labels and small boutiques, there is no-one in the industry that can’t take social media and use it to their gain.

A perfect example just how powerful social media is can be provided by 5 powerhouses, and they aren’t brands. With a combined following of over 71million fans on Instagram alone, there are 5 women (with an average age of just 24), who epitomise the new phenomenon that is ‘the social supermodel’. Kendall Jenner (35.1 million followers), Cara Delevigne (18.2m), Gigi Hadid (5.2m), Miranda Kerr (6.9m) and Candice Swanepoel (6m) are supermodels who are quite literally taking over social media, sharing snaps of their life, their portfolios and campaigns and have fans hanging off their every photo. It’s worth mentioning at this point, that they have more followers than the President of the United States, Barak Obama, who only has a measly 4.2million.

Not only do these incredibly powerful ladies highlight the prominence of fashion on our timelines and newsfeeds, but they show what an immense influence social media has had on creating ‘the supermodel’. In the ’90’s Kate Moss and Naomi Campbell rose supreme and until very recently, were the epitome of the catwalk queens. But when you look for them on Instagram, Naomi’s presence is dwarfed by that of her more social media savvy counterparts and her following sits at a modest 1.9million. Moss doesn’t even have a public account. 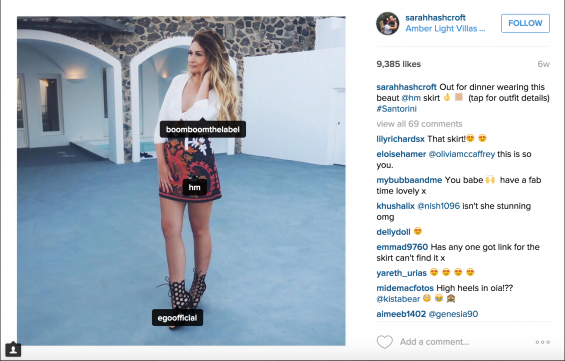 It’s not just supermodels that are keeping our newsfeeds on trend, though. Bloggers are also keeping our fingers on the fashion pulse by uploading countless snaps a day of them wearing the latest styles, with high street and online brands using bloggers as a way of hitting the mainstream. Labels such as Hot!Mess, InTheStyle and Missguided to name a few, have cashed in on the blogger hype and their huge reach, sending their clothes to girls who parade them across our feeds daily, making use of tagging and comments features to draw us to the brand. The trend has got so popular that bloggers, such as Sarah Ashcroft (above), have made full-time careers out of it. This is also a sure fire way for brands to get past ad-blockers (which more of us than ever before have installed onto our web browsers) – a perk most other industries just don’t have.

Anyone with social media account will have noticed targeted social media advertising platforms mean we’re inundated with tons of ads every day, and clothing brands will make up a hefty proportion of these. As if filling our news feeds organically isn’t enough, the fashion industry is paying to make sure it’s there, too!

So, what does the future hold for fashion on social media? If current trends are anything to go by, it’s only going to continue taking over. With platforms such as SnapChat allowing us even closer to brands and their ambassadors, and Periscope allowing us to live stream video, it won’t be long before we’ve got front row seats at fashion week from our living rooms – fashion has a tight grip on social and it’s showing no signs of letting that go!