A staggering 1 in 7 people on Earth logged in to Facebook in a single day this Monday when the social networking platform reached a landmark 1 billion log-ins in a 24hour period.

Though Facebook’s stats are impressive – 1.5billion users are active a month – the news of such a huge proportion of these users logging in at once marks a huge milestone in the companies achievements. Founder Mark Zuckerberg announced the success in a post on his own Facebook page  (where else?!) earlier this week describing it as ‘connecting the whole world’. 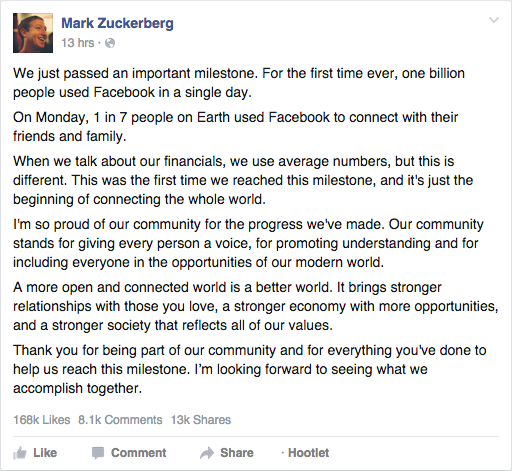 As if marking themselves out as leaders in the field in terms of user figures wasn’t enough, Facebook also announced this week that they are to begin test artificial intelligence software to live in it’s Messenger app, called M. ‘M’ will take the role of a digital assistant that will complete tasks on behalf of the user, including purchasing items, booking restaurants and arranging appointments.